The weekend of 15 and 16 March will be full of activity in the Catalan Pyrenees. In Molina, from Friday 14th at 9am until Saturday 15 will host the final of the Speedway World Cup Snowboard Cross FIS season.

Layout of Alabaus be chosen to see the 50 best snowboarders in the world in action stage. Besides Catalan Anna Love also attend three of the Spanish Olympic Olympics in Sochi: Lucas Eguibar, Regino Hernandez and Laro Herrero, all three options medal. On Friday 14th 10:45 h to 12:20 h there will be male and from 13:30 h to 14:40 h female heats heats. On Saturday 15th from 11:30 h to 12:40 h male and female end of the test World Cup Snowboard Cross FIS will be held.

After the race and as party to celebrate the end of the World Cup circuit, FM proposes Flaix Alabaus, after the morning ski trip, full of music and surprises for skiers and snowboarders event. La Fiesta Flaix begin on Saturday March 15 from 14:00 h after the awards show proof of Snowboard World Cup circuit for Alabaus and will be accompanied by Flaix FM DJs.

12:00 am to 14:00 pm there will be the inscriptions of the gymkhana which will last approximately two hours. After the activity will be an awards ceremony and the party lasts until 19:00 h. There will be music in the terrace bar Alabaus converting the parking industry in a dance floor.

On Saturday 15th we celebrate the Moon Race, a competition ski mountain at night Puigmal advantage is full moon night. Parallel output will be a shoe accompaniment to the race, a race suitable for all ages to enjoy and explore nature during the quietest hours of the day. Finally will be a barbecue and live music. The zipper will have a special service down after the concert.


Saturday marks the 15th Circuit IX Catalan Snowshoes organized by CMSLL in ski Vallter2000. At 1700 Orientation begins testing consisting of start-up orientation in the forest. At 1840 the popular will snowshoe walk by Vallter 2000 in the light of the moon without competitive spirit and can do two circuits climb to the peak of the woman to see the Pyrenees illuminated. At 18:30 h start of the Championship of Catalonia Snowshoes (open enrollment). All participants will have gifts and at the end there will be a raffle item and pica-pica. Bring front and are advised to wear safety equipment.

Would you join a Weekend in the Catalan Pyrenees eventful? 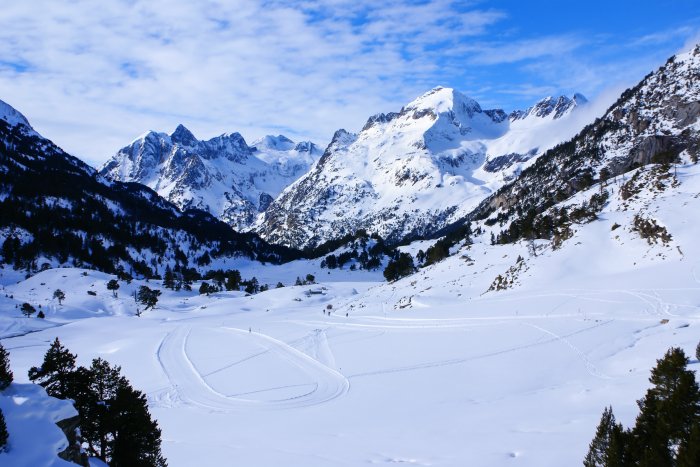 Next ski destination of the Virtual Tour: Andorra