The ski season has come to an end! We know that there are many of you who have not been able to enjoy the snow as you would have liked, but don't worry !! We are already preparing and counting the days for the 2021 - 2022 season .

That is why today, to make your wait more enjoyable, we want to tell you about some of the most incredible records that have been established with skis. We want to challenge you to try to break them next season.

Who knows? You may be a record breaking skier and you still don't know it. In ski jumping speeds of over 250 km / h. can be reached 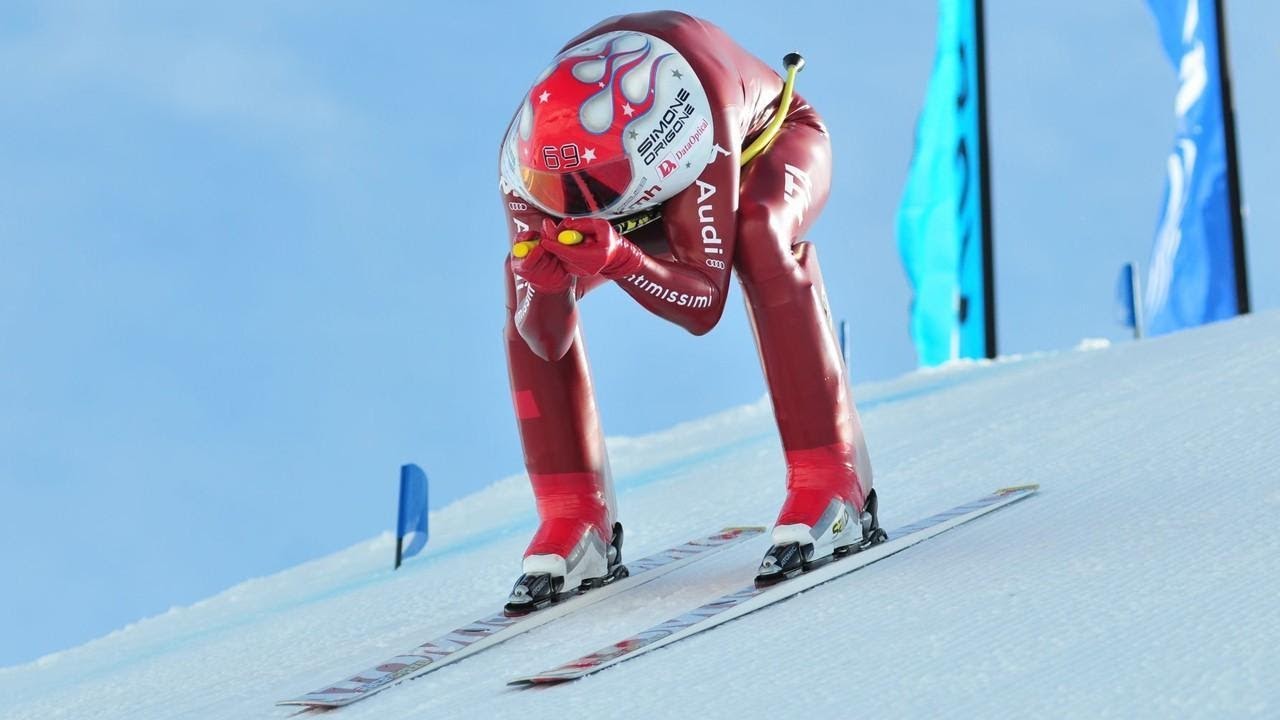 Next we leave you with the 7 most impressive records on skis . Let's go!

Who has not ever tried to jump while skiing? And surely in most cases you have ended up on the floor! It doesn't surprise me, you need to have a medium-high level of skiing to jump long distances. It's not an easy task to accomplish except for Stefan Kraft .

His name may not sound familiar to you, but in 2017 he broke the ski jumping world record by flying a total distance of 252 meters . Amazing!

In that same competition, Russian Dimitri Vassiliev managed to break his mark by jumping 254 meters, however this jump was declared not valid as he fell after the landing. 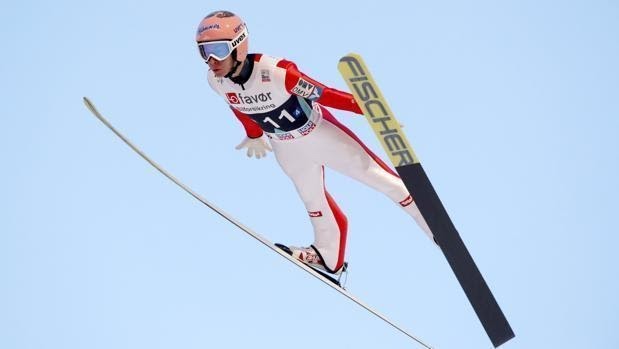 Stefan Kraft in the jump where he broke the world record.

Exclusive information from Esquiades.com Did you know that there are Spanish ski resorts that still have ski jumping facilities? These are the two ski resorts where you can find them: La Molina and Astún .

At one point these trampolines got very trendy and most of the ski resorts started building them. They were built in the 80's but soon got removed due to the lack of interest in that discipline.

The highest BASE jump in history

If the previous achievement seemed spectacular to you, this one will leave you with an open mouth.

The professional skier Matthias Giraud performed in 2019 the highest base jump ever.

How did he make it possible? Well, he went skiing from the top of the Mont Blanc mountain (4,810 meters) and jumping off a glacier located at 4,359 meters only using is parachute

Exclusive information from Esquiades.com : do you know that you can reach the top of the Mont Blanc mountain very easily? This is possible thank to the Aiguille du Midi cable car, it's 3.842 meters high and located in Chamonix.

Would you like to discover the majesty of Mont Blanc from a closer side? With esquiades.com you can purchase the Chamonix Unlimited ski pass that gives you access.

Can you imagine someone skiing as fast as a Formula 1 racing car without the need of an engine? We believe it, It's possible!

As you can see on the video, Ivan was wearing an aerodynamic suit that allowed him to reach that speed and which also caused the acceleration to be faster than a Formula 1 racing car.

Exclusive information from Esquiades.com: The ski jumping world championships are held every year in Grandvalira, they use the famous black slope RIBERAL which is very near to Pas de la Casa ski area.

Oldest skier to do Heliski

If you think that skiing or snowboarding is a sport for relatively young people, then you are wrong. Not long ago a skier called Junior Bonous (95) broke the world record by being the oldest skier to practice heliskiing. Still don't know what heliski is?

It is a discipline in which you are taken with an helicopter to the top of a virgin mountain, once at the top they leave there and then the goal is to safely reach the bottom of the mountain by sliding down through very difficult slopes. 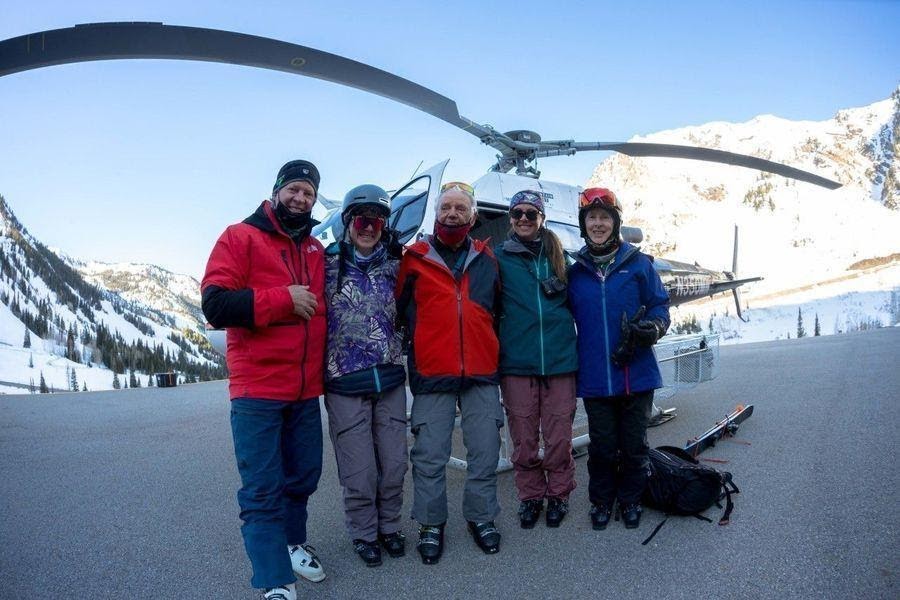 Junior Bonous next to the helicopter that took him to the top of the mountain.

Exclusive information from Esquiades.com: You may have never heard about this discipline, it is quite known in countries like the US and Canada. However Baqueira Beret ski resort in Spain has started selling this activity. Are you brave enough? don't miss the opportunity and check it out on Esquiades.com

When you go skiing you normally don't have to worry about going to the top of the mountain, you just sit on the cable car or chairlift and enjoy the beautiful views.

On a good day of skiing (say 6 hour skiing) if you had to count all the ascents with the cable car it would sum up around 7 / 8km.

Well, our next skier came up with the brilliant idea of ​​trying to break the record for the greatest unevenness by skiing during 24 hours without using the ski lifts or chairlifts. That is, going up and down only using sealskin and skis 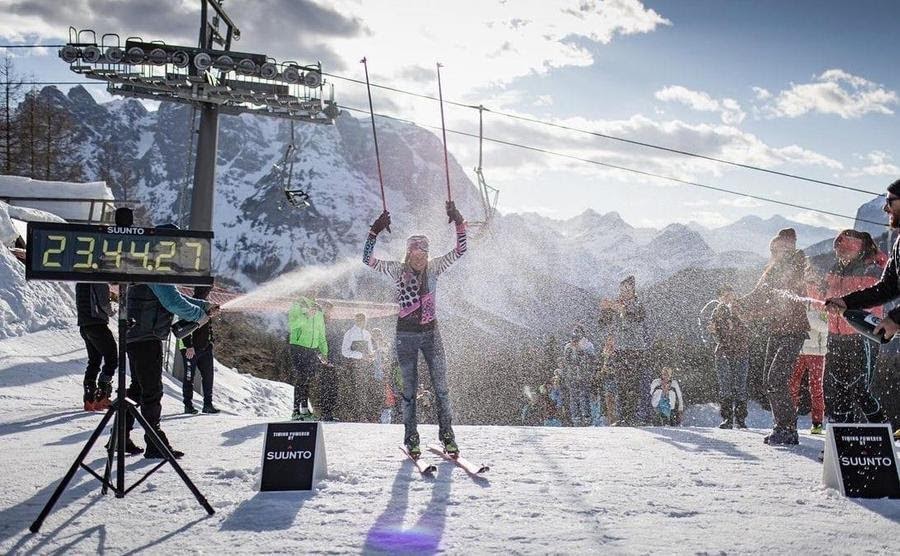 In total, she made a whopping 17,645 meters of elevation gain, going constantly up and down. It's like going up and down Everest more than 2 times in just one day!

Exclusive information from Esquiades.com: This achievement took place in one of the ski resorts near the Dolomiti Superski ski area. We still don't have any offers here for next season, but we are already working hard to be able to offer them very soon.

Do you want to ski in Italy? Very soon in Esquiades.com!

As you may know It's not always cold in the ski resorts. When spring arrives, the weather can reach up to 15 ° C in the central hours of the day.

In 2013, 500 skiers and snowboarders put on their swimsuits and went skiing. This happened in the Siberian ski resort of Sheregesh. 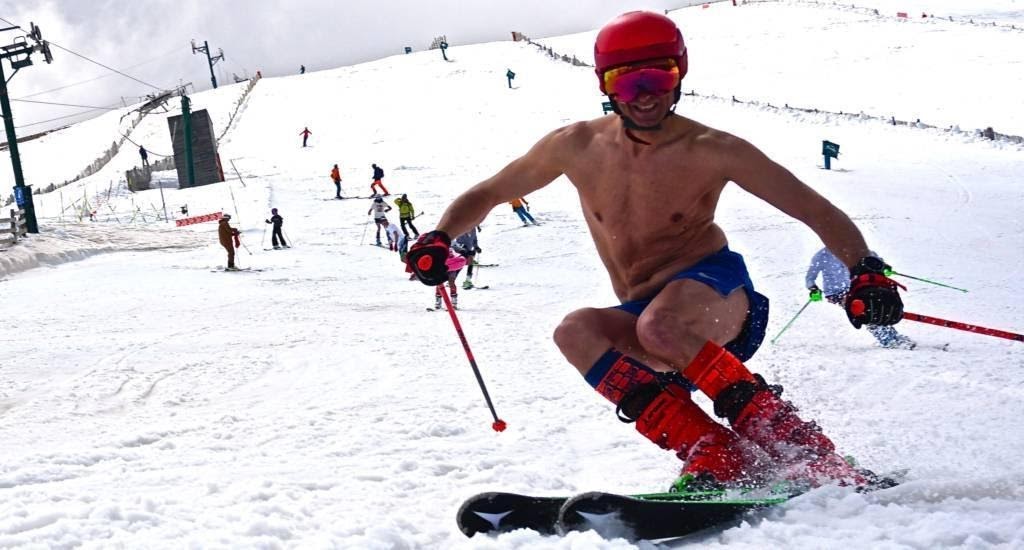 It's also common to see people skiing in their swimsuits in the Catalan ski resort of La Masella.

Exclusive information from Esquiades.com: You don't have to go that far to enjoy this show. In the Spanish Pyrenees, there are several ski resorts that say goodbye to the last day of the season descending in a swimsuit and they even prepare a small pool so you can ski over it.

One of the best known and which has been holding this event for several years is Formigal. If you fancy having a go well take a look at our ski holidays in Formigal-Panticosa .

Sooo, we've saved the best for last. Not everything was going to be achievements in Canada, the French Alps or the Dolomites, we also have world records that were done very near to us!

In this case we are going to take you to the Aragonese ski resort of Astún .

The 6 times trail running world champion Luis Alberto Hernando, together with his partner, Sergio Lamas, wanted to establish a new world record of vertical skiing during 24 hours . Or what is the same: non-stop ski for 24 hours in Astún. 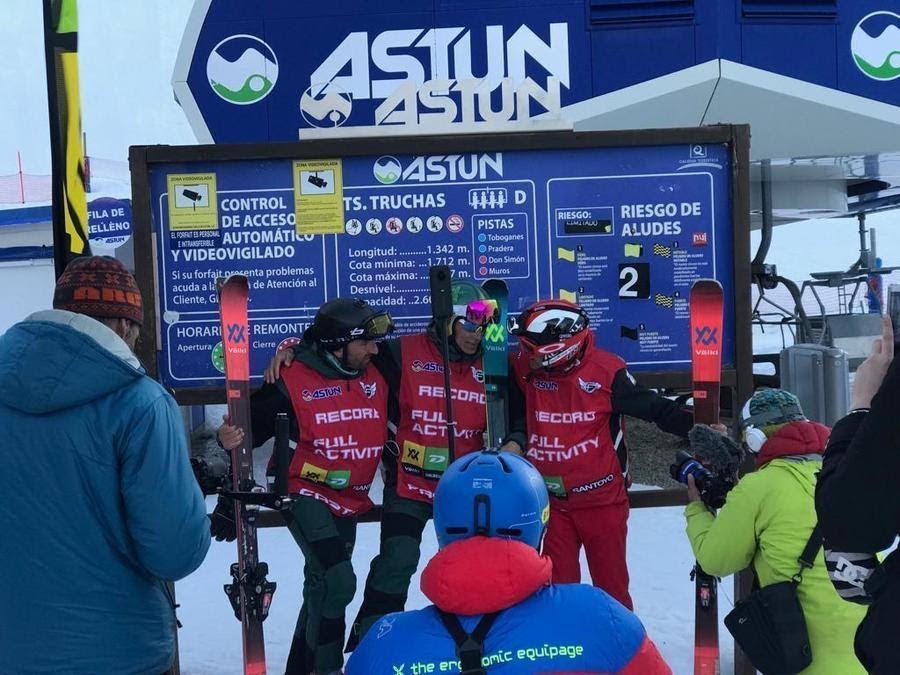 Luis Alberto and Sergio celebrate the record in Astún.

They Both achieved a cumulative drop of 86,565 meters. To do this, in 2017 they started skiing on a Tuesday at 8:00 am and finished at the same time on Wednesday. Amazing!

Exclusive information from Esquiades.com: Despite the fact that Astún is not a very large resort (it has 50 skiable km), the Ski Pass is valid for Candanchú too, so between both resorts there is a total of 100 skiable km.

Are you ready to challenge yourself and beat these records? Book your ski holiday now! 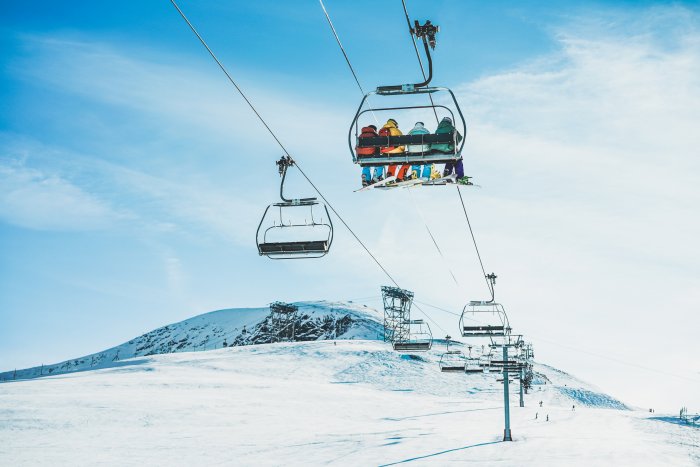