Zermatt + Cervinia (International)
Where are you going?
Serra da Estrela

Grandvalira and Ordino-Arcalís start a new summer season with an expansion of the offer of proposals, which make it " the most complete we have ever had in summer ", as explained this morning by the General Manager of Grandvalira Resorts , Juan Ramón Moreno, during the presentation of the season that has been held at the Mon(t) Magic Family Park in Canillo.
Precisely, the family park stars in several of the novelties of the summer, with three new attractions and three new types of tickets , in the same way as Ordino-Arcalís , which incorporates electric bicycles into its offer, led by the Mirador Solar and the excursions to the lakes of Tristaina .
Grandvalira faces the summer season with the motto " Summer without limits ", with which it wants to highlight the wide variety of offers for all audiences that the different ski areas of the resort have, once again this year, with activities in the middle of nature accompanied by gastronomic proposals , which make the resort a gastronomic destination for this time of year. For its part, Ordino-Arcalís is committed to the motto " Where time stops ", with which it wants to reinforce that the resort is the ideal place to connect with nature and relax , and is also a clear reference to the Tristaina viewpoint and to its sundial function .
In the presentation of the new summer season this morning, Moreno also recalled that "we are coming off a magnificent winter season, and everything indicates that in summer we will have a very similar visitor profile with a local customer who will be very important . Despite the current situation of uncertainty, we hope that the summer will also be very positive”. The event was also attended by the general manager of Grandvalira - Ensisa, David Hidalgo, who presented the novelties in the Canillo and Soldeu ski areas, and by the business development manager of Grandvalira - Saetde, Xavier Salinas, who presented those of the ski areas of Grau Roig , Encamp and Pas de la Casa , as well as Ordino-Arcalís .
For his part, David Hidalgo has indicated that "this summer we hope to be able to repeat the success of the past, the bookings at the moment indicate this". Finally, Xavi Salinas highlighted that Grandvalira "is a gastronomic destination during the summer" thanks to "the first-lesson offer" of its proposals, such as the Llac dels Pessons Restaurant , one of the most emblematic points of the resort.

One of the main novelties of the season is the incorporation of electric bicycles with different circuits in the Coma area . These new routes contemplate different levels and durations, such as full-day holidays or other smaller ones. The second great novelty in Ordino-Arcalís is the installation of a camera on the Creussans chairlift with which spectacular photos will be taken with the Creussans Lake in the background that visitors can take home as souvenirs .
It should be remembered that the summer season in Ordino-Arcalís began on June 4 with the opening, on weekends, of the Creussans chairlift, which gives access to the Tristaina Solar Viewpoint. The resort's offer will be expanded from June 23 with the daily opening of the Creussans chairlift , as well as the start-up of the Tristaina gondola lift and the closure of the Coma road so that cyclists can enjoy the last 4.5 kilometers without road traffic . This year, the summer season in Ordino-Arcalís will be the longest in history since it will last until November 1 , when the Creussans chairlift will close.
As for restaurants, Arcalís once again has the La Coma restaurant , which has been completely renovated in terms of both the restaurant - the interior spaces, the dining bedrooms, the kitchen, the cafeteria - as well as the terrace, where A Basecamp of hammocks and tables will be installed. Likewise, the restaurant offer has been renewed, and everything will be ready for June 23 . In addition, every Saturday in July and August it will be open at night for dinners with live music and entertainment. For its part, the Sorteny Refuge offers the perfect proposal to enjoy mountain cuisine and stay in the heart of the idyllic Sorteny Valley since May 1.

The Mon(t) Magic Family Park opens on Saturday June 18 and this summer will feature three new activities: the QuickFlight , the Red Shark and the Push Bikes . The QuickFlight is a 7 meter platform jump located right next to the BigAirBag jump platforms. In fact, the platform, which will be ready at the end of June, will be an extension of the existing one, and in this case users will be equipped with a waist harness for jumping.
The Red Shark are bicycles placed on top of a board very similar to those of paddle surf , so that you can enjoy the sensation of pedaling on the water. The Push Bikes , on the other hand, are bicycle circuits without pedals for children between 3 and 5 years old.. It is a simple activity, designed for initiation and in which parents can accompany their children.
To practice these activities, Grandvalira Resorts offers three new park ticket packs. The first is the Basic Pass , which includes the ascent and descent to the viewpoint ski lifts (Portella, Incles Valley and Espiolets), the adventure game Explor Games , the Fornatura , the Soldeu Marmot Observation Center , the Sendero of the Legends , the Trekking circuits and the Inflatables .
On the other hand, the Únic Pass includes the same as the Basic Pass , but two descents are added in the Màgic Gliss , archery, tubbing , pedal cars, Acro Jump , Big Airbag , canoes , kayaks , water scooters and push bikes .
Finally, the Adrenalina Pass , created for people over 14 years of age , includes the same as the Basic Pass plus tickets to the star attractions of Mon(t) Magic : the zip line , two descents on the Màgic Gliss , as well as the novelties of the QuickFlight and RedShark . 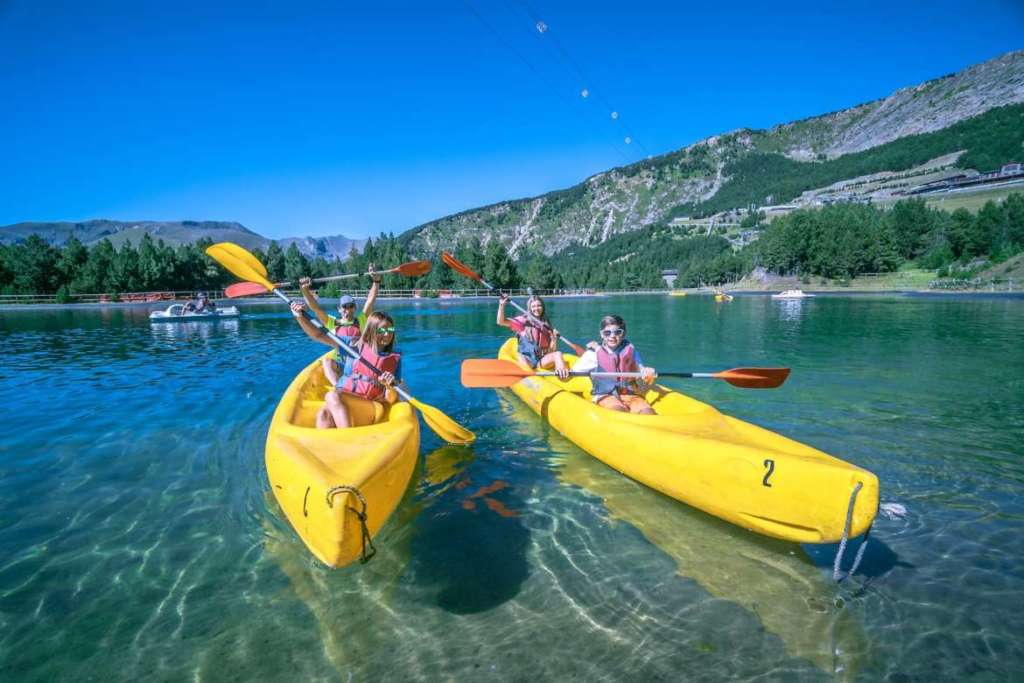 The park will be open continuously until September 11, and from then until October 12 it will open on weekends and holidays.
Another point of interest in the Canillo ski area is the Mirador Portella , which will be accessed by a chairlift that will open two weekends in July (16 and 17, 25 and 26) and every day in August until 28. Finally , the gastronomic proposal of Canillo is completed with the Roc de les Bruixes , the Xiri Forn and the cafeteria.

This summer the Soldeu ski area also incorporates two new ticket packages similar to those of the Mon(t) Magic Family Park in Canillo , and designed mainly for non-golfers. These are the Basic Green , which includes the same as the Canillo Basic Pass, and the Green Pass , which offers the same as the Basic Green , plus 1 hour of Practice and 20 minutes of Segway or a guided tour of the golf course in Buggies .
Likewise, from June 24, golf lovers will continue to have the opportunity to enjoy the highest 9-hole course in Europe (2,250 meters) , which has a par 33 in a length of 2,590 meters and 16 hectares of extension. . In addition, this year the Soldeu Golf Club has been reactivated, so there will be much more social activity on the course. 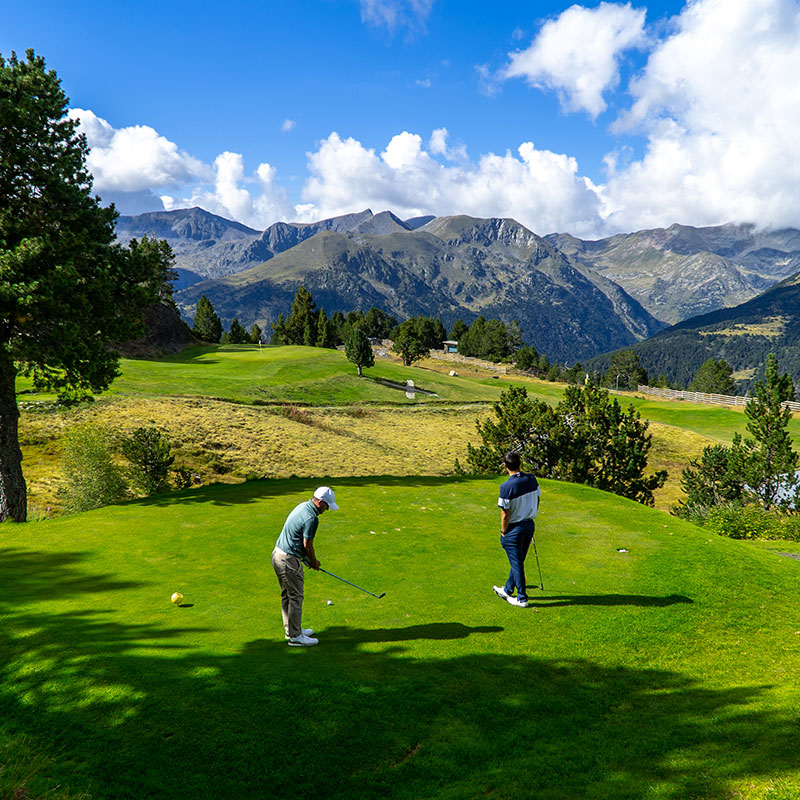 Soldeu is also a key point to observe and learn more about native animals with the Marmot Observation Center and outings led by experienced beekeepers.. Another activity available in Soldeu is the 20 or 40 minute Segway outings.
The Soldeu offer is completed with the gastronomic proposal in charge of the Wine & Meat Bar by Jean Leon restaurant, which has a menu with fresh market cuisine and a Josper area with the grill as the common thread. In addition to the restaurant, the ski area also has a cafeteria.

On July 2, the Funicamp will open, the longest funitel in Europe with a 25-minute journey through the Cortals valley , which reaches an altitude of 2,502 meters. From there you can take routes on foot and 4x4 excursions to discover high mountain landscapes and cultural and historical heritage by visiting the Orri del Cubil . In addition, you can take a 4x4 bus holiday to the Orri d'Encenrrera or the Pessons Lake , in the Grau Roig ski area, where you can also go hiking , cycling , fishing and taste the delicacies of the Refugi Llac de Pessons Restaurant. The restaurant offer in the Encamp ski area is completed with the cafeteria and the Solanelles Restaurant self-service, which can also be enjoyed on its spectacular terrace . 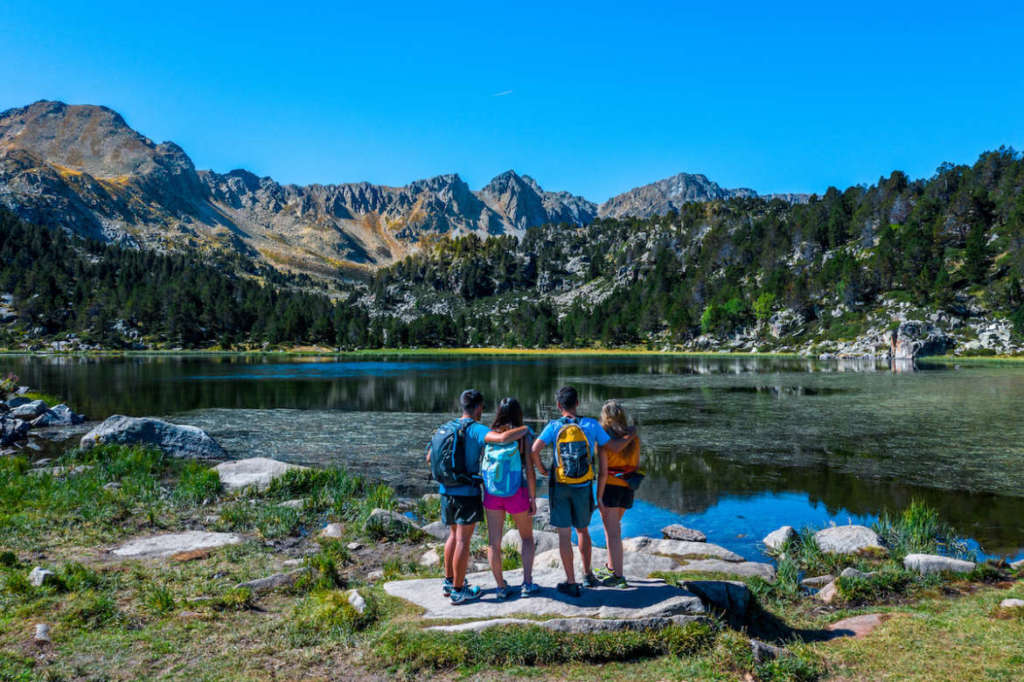 The Grandvalira Mountain Guides ( GMG ) have their summer edition for another year. The mountain guide centre offers the possibility of getting to know Grandvalira by traveling the paths and routes of Andorra in a way that is more accessible to all than in winter.. GMG also offers the possibility of climbing , orienteering or fishing and, for the most daring, helitrekking : an experience that combines hiking and helicopter excursions . In the case of Lake Pessons , the 4x4 bus will be active again to access it.
To complete the day, nothing better than enjoying the gastronomy of the Refugi Llac de Pessons restaurant, one of the most emblematic of Grandvalira , as well as the lesson ic Brasserie Piolet , which will be open from June 23 and July 1, respectively.
Also in Grau Roig there is the possibility of spending the night in the mountains thanks to the experience offered by Epic Andorra in the Cabana Piolet , at 2,150 meters, between the Pessons and Colells circus , at the foot of the Montmalús Peak , or in the original Domo Lodge , a transparent igloo located at an altitude of 2,350 meters that allows you to enjoy nature thanks to its large window. 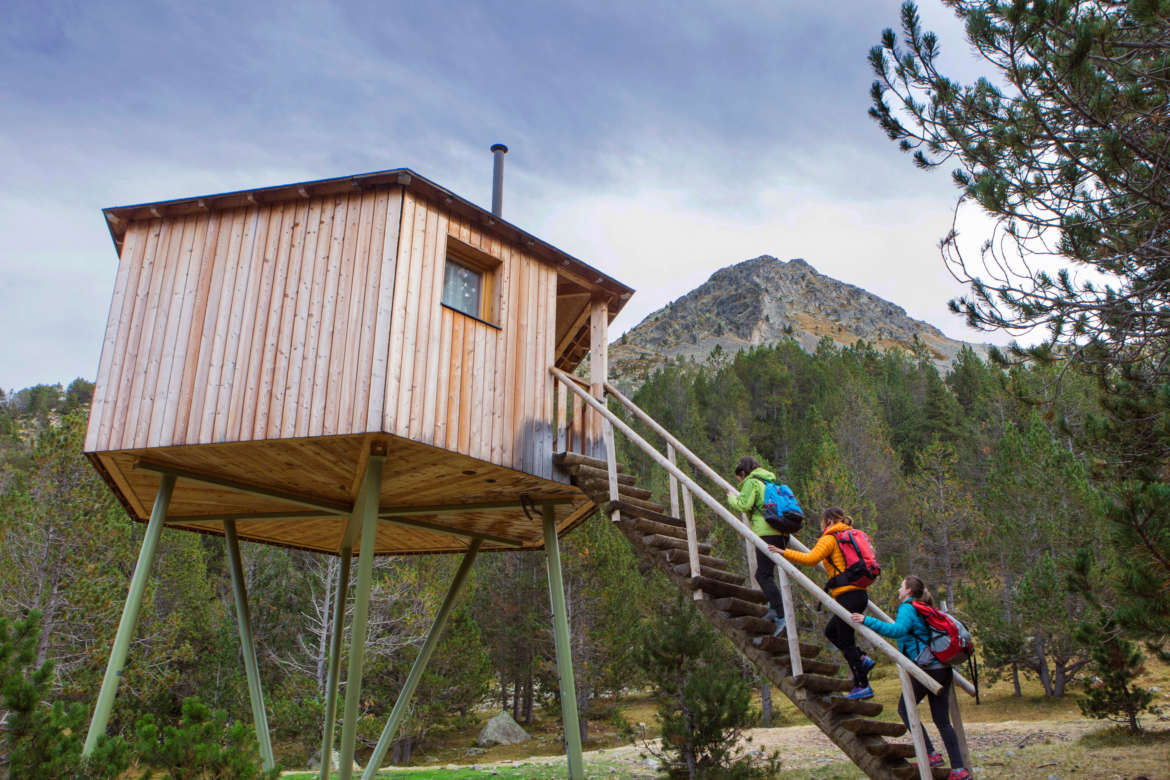 PAS SECTOR OF THE HOUSE

In Pas de la Casa , summer begins on July 2 with the opening of the Pioners gondola lift and the Isards chairlift every day from 10 a.m. to 2 p.m. with the aim of facilitating access to the mountain for all ages. and that visitors can go further, for example to the Estany de les Abelletes , very popular with fishermen in the area. 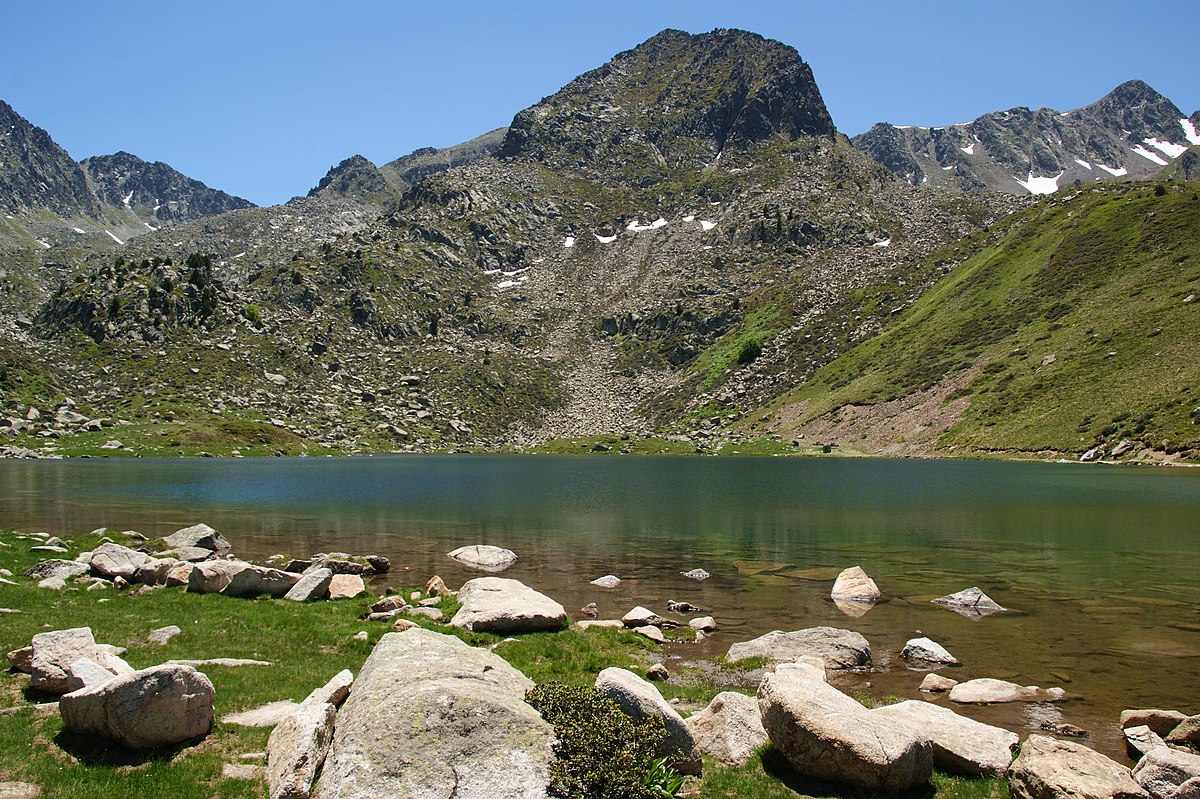 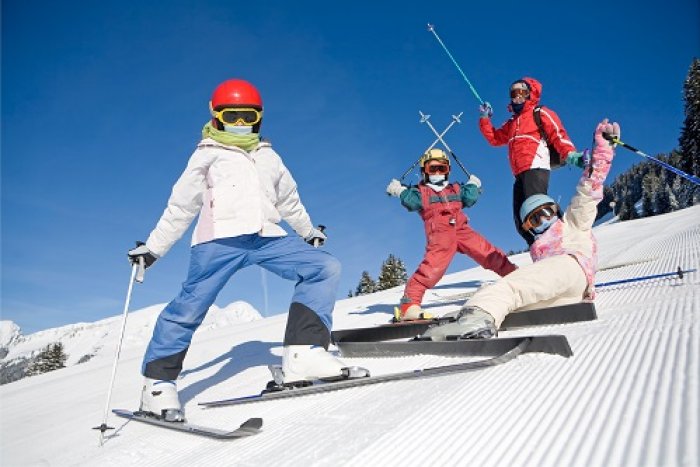 Tips for skiing at half-term