This was the last week of our 2021 ski season! We have to say that although it was better than we first expected, it has left us a bittersweet taste. Most of us have not been able to enjoy our favorite sport as we would have liked and many others haven’t even had a chance to put their skis on.

As in every end of the season, we’ve now started the countdown and feel excited for the next one. But let's be honest, it's still so far away!

Our mission is to make this wait shorter, so now that we’re not able to ski during the next months, why not do it virtually, right?

The truth is, there’s a huge amount of winter sport video games! We won’t be able to mention them all so we have made a selection of the most played and the ones that caught our attention.

Steep, The king of snow sports

Although its last edition, Steep X Games, was launched at the end of 2018, the Steep video game is still going strong.

This game is set in an open world where you can simply slide through the snow and observe the landscapes (in its latest game expansion you will be able to ski in Alaska and the Alps!) while sliding down you will have to collect all objects found in your way. You can trace your own route! Also, you choose how to ski the mountains: with a snowboard, with skis, wingsuit or paragliding. Wow!

Besides the open world, in this sports video game you have to compete to become the best in the chosen modality, either if it’s on skis or on a snowboard. And what about taking a virtual race with your friends? This is so cool!

In the latest version of Steep, the real competition is presented by 8 winter sports in which you have to prove that you are the best in the mountains and overcome all the challenges. Master skills such as jumping, superpipe or slalom, and become the winner of the X Games!

Another version of open world: Snow

This video game is essential for skiing and snowboarding lovers. Here you will slide down an infinite mountain of a great alpine resort. Although it is very similar to Steep it deserves to be mentioned, especially for two reasons.

First of all, because you can play it using Oculus Rift, a virtual reality headset. The feeling that this gives you is as if you’re the one descending. We assure you that this adds extra excitement when you are playing the game!

The second reason is that, unlike Steep, you can play for free. This is a great option if all you want is to spend some time playing games without spending a penny. 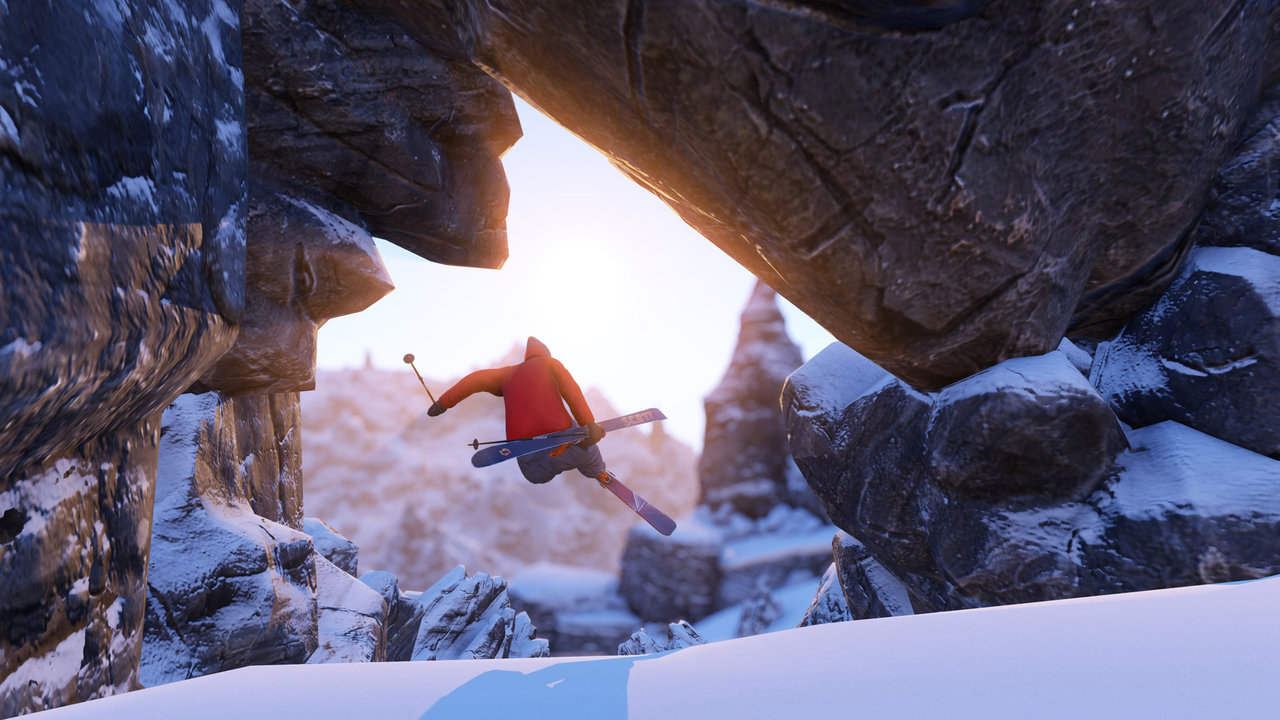 If this snowboarding video game stands out, it is for its spectacular graphics. It has its own style, as well as a great technical and sound finish.

In this runner-style game you will join Alto and his friends on what its developers have described as “an endless snowboarding odyssey”. You will go through wonderful landscapes while you guide the riders through the different routes, avoiding obstacles and learning new tricks. It may seem simple, but takes time mastering them all!

We definitely recommend playing this game, even if it's only to view the minimalist images.

For the ones that don't know this, The Sims is a social simulation video game that was first released in 2000 and hasn’t lost its fans since! The Sims 4 is in its fourth edition of the game and during 2014 and 2015 it became one of the best-selling PC games in the world!

This classic game isn't a skiing game. However The Sims 4: Snowy escape expansion pack arrived in November of 2020 for all of you Snow lovers.

This expansion transports us to the imaginary Mount Komorebi, located in Japan. Here you can make your Sim go on different snow adventures, such as sledding, snowboarding, skiing, climbing, ice skating and climbing. Choose the mode that suits you best and make your sim improve its skills!

You can decorate and design your own world with fondues, fireplaces, wooden houses, spas and even snow festivals. You won't get bored! You can also customize your sims with skiing and climbing outfits. It's just like going back to ski season while you're home!

Snowboarding The Fourth Phase, a world of snow on your mobile device

Also an open world game like Steep and Snow, the difference with this one is that we can play this with our mobile device.

It has several game modes. You can choose the Career mode, where the legendary snowboarder Travis Rice will help you become one of the best in the world with the board. On the other hand, an Arcade mode is also available, where you will face fun little missions. Finally, in Competition mode you will have to test yourself against other players. Must say that this is a very complete game!

There’s plenty of different levels and stages where you will have to descend through the most epic mountains, such as the Rocky Mountains (United States), Hozameen Range (Canada) or Denali Peak (Alaska).

Another interesting thing about Snowboarding The Fourth Phase game, is that you will be joined by your personal drone, Giving you the option of stopping the game to take pictures from different angles and record videos of the different tricks you perform while descending. So why not Show off and show your friends how good you’ve become at snowboarding!

This video game is very different from the ones we have seen so far, in When Ski Lifts Go Wrong our mission is not sliding down the mountains but to ensure that skiers and snowboarders safely reach the top by building your own structures.

We’re in front of a construction and puzzle game based in a snowy scene between mountains. It is undoubtedly the funniest game, I guess you don’t want to see how your riders fail in their attempt to reach the top and end up crashing and falling to the ground, right?  So focus and be the best at building the ski resort!

As we have already mentioned, the mission of this video game is to build chair lifts, gondolas, jumps and bridges to take tourists to the top. Although this may seem simple, we assure you that this isn’t easy peasy, you will have to give your best to reach the top!

What did you think of our video game selection? Have you played any? Hope this list helped you find one and therefore makes the waiting a little more enjoyable. If you know of another video game that you think should be on this list, feel free to comment! We read you